Well here it is, the end game has been played for this one I think. It’s been a frustrating journey for such a pretty model. Starting with my initial thoughts here https://albionyard.wordpress.com/2017/03/01/hattons-djm-14xx-review-h1410/, and the subsequent trials and tribulations with the chassis https://albionyard.wordpress.com/2017/03/20/14xx-frustration/.

The locomotive sat on the shelf of doom for the best part of a year, and a re-organisation of the man cave identified a few fast fixes, this being one of them. After the chassis mods, it’s still running on a reduced drive with replacement coupling rods, I decided to bite the bullet and complete it. There were two standout visual compromises for me, the cab glazing and the lack of ash pan with also a lack of brake pull rods.

There’s no question the cab is nicely detailed, but it has an internal front wall giving a double glazing appearance. As part of the breakdown I did I removed all components and removed the inner wall. Once this was done I replaced the glazing flush glazing the front windows, it makes a massive difference!

I discarded the rear glazing too with the prominent rear window bars the lack of glazing isn’t noticeable, apart from there’s no prism effects!

Cab shutters and roof vents were opened and replaced, allowing light into the cab, making the best of the interior detail.

Whilst still in two minds regarding replacing the chassis the ash pan was next on the list. 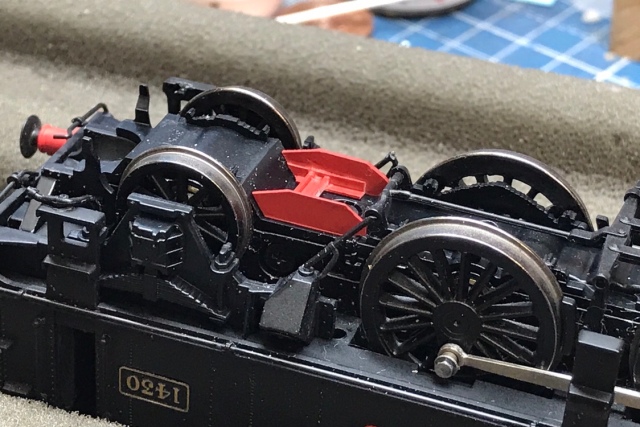 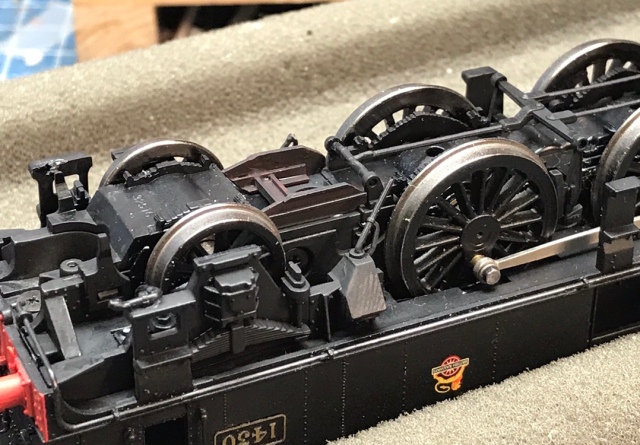 The brake pull rods aft of the rear drivers isn’t represented and for the time being I’ve left those off, they’re not too noticeable, but I may revisit them in future. A simple H frame was made, and the outline copied from a drawing, this has been lightly glued the final effect above filling a very noticeable gap on the underframe.

So as 1430 around 1957 this is it, just the auto gear to add and a light weathering. It still cogs on gradients, but the layout design may not use different levels so the impact will be negligible. The changes have been worth it, the biggest improvement being the coupling rods. The engine doesn’t look sloppy when it runs, both axles turn in synch, and that definitely improves the slow running.

Earlier today I had the pleasure of operating Geoff Taylor’s Cambrian layout and watched his example working without hesitation across the scenic sections, and the hidden inclines.

So that’s my 14xx then, into operating stock.

I’m pleased it is, but still frustrated that it’s not as good as it looks, or as it can be