There’s a bit of an Irish answer kicking round with this one, in that if you want to finish up with a good chassis, I wouldn’t be starting from here. When buying a model for use, my primary concern is that it runs well, cosmetic and detail variations I can attend to relatively easily, but the core function is the model has to move, and move smoothly throughout it’s realistic speed ranges.

Having test run the Hattons/DJM 58xx above, I wasn’t over enthused with it. In original spec the coupling rods were way to large and moved around the crankpin, with an elliptical motion that was clearly visible.

One thing I felt worth tackling was the coupling rods, and bought a set of Alan Gibson rods (4M75) to try out. Part of the running trials indicated that running on downhill grades the mechanism had a tendency to bind or lock. This occurs when there is either a load pushing or pulling the locomotive. I took a small bit of video of mine in action on a Woodland Scenics 3% gradient.  DJMhattonsincline.14xx All main testing has been done with a Gaugemaster ‘W’ controller in DC. The binding and cogging still occurs in DCC mode having briefly tried it.

I’ve been working on the ‘big’ plan again and one ruse to extend running time between locations I’m considering is an external track behind the scenery. To maximise this and minimise the visual appearance I’m hoping to drop the track level and hide the extra mileage at the back of scenic sections. To do this, models have to be able to climb and descend gradients reliably, hence getting the Woodland Scenics ramps to try them out. Well as you can see in the filum the chassis binds when any load is applied when descending. As the J94 does the same, ( DJMJ94 chassisprob ), I’ve tried six of them, there must be an issue within the gear train assembly or design, or both. This effect happens with a load ‘pushing’ downhill, as well as in front of the engine, ‘pulling’ it downhill. 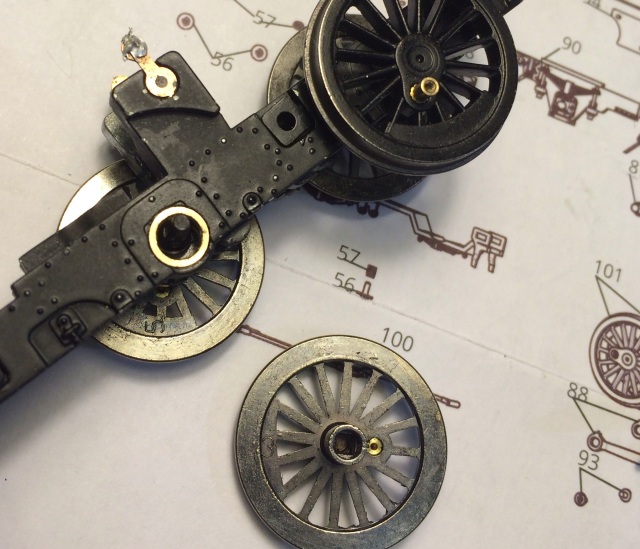 Wot I dun to fit the Gibson rods.
Undo the vac pipes which clip into the buffer beam at each end.
Break the glue fixing of the injector pipes at bottom of cab steps.
Twist and remove front sanding pipes.
Undo three screws, one either end of chassis behind drawbar and one in centre underneath the cab.
You can now pull the body away from the chassis, caution, it is still connected by the motor wires. (Hint) Easier to unsolder them now. Leave the body upside down so you don’t break the rear sandbox pipes.

Remove coupling rods, fixed with hexagonal head screws.
Lever off the baseplate using small screwdriver, its held on by six clips, two either end of the chassis, and two behind the centre drivers.
Remove wheel from leading axle. Using a flat cross section ‘tool’ gently lever the front wheel off from the axle. This gives you access to the screw at the front of the chassis which is otherwise inaccessible due to the wheel….
Undo the three side screws and gently lever the chassis apart. There will just be enough room to remove the second from front free running gear wheel. (If there isn’t remove or loosen the centre drive axle wheel). Removing this gear will leave the front axle independent of the drive train. Caution, check all the remaining gear train has re-seated in their axle drive holes as you push the chassis back to reassemble it. Make sure you quarter the front drive wheel to the centre axle on reassembly.

Fit coupling rods and check chassis is free running with no binding If there is, just open the crankpin holes with a reamer to get a little extra clearance. Once the chassis is running sweetly, fit the rod retaining nuts. Note there is still a large amount on clearance on the crankpin due to their length, I may try and get some washers turned to minimise this, I’ve not yet checked viability of shortening the existing pins.
Re-solder chassis to motor wires and fit chassis to body including three screws to hold motor and body so gears/worm will engage.

Caution ( ask me how I know…), its easy to get a motor wire entangled with the worm leading you to think a wire is adrift or motor has failed, gearbox jammed, all of which you can’t see. If the chassis runs refit the vac pipes and sanding pipes.

Million dollar question, ‘Does it run any better without the cogging?’ In short, no. It does have a very slight improvement in the running and certainly in the appearance, but it doesn’t solve the bind or cogging descending a gradient under load. This means that if you have gradients unless you opt for a full replacement chassis this binding will continue. For me, this points to an incompatibility in the worm gear to tower gear drive components. What that means for the longevity of the chassis components and motors is anyone’s guess, but its not likely to be positive. The next model for release with this type of geartrain is Kernows 13xx family, and inspection of an EP at Stevenage this year showed a slotted crankpin hole in the coupling rods. I hope they don’t have the same problems if using the same style drivetrain.

It’s interesting that online comments and videos indicate no problem with the chassis on gradients under load, but apart from mine above, there are no comments or tests of this model (to date) under load, coming downhill. I find that odd, and to get a sweet running chassis in all modes of operation, I’m convinced this design isn’t where I’d be starting from…