2013 was, we are told the year of the ‘selfie’, basically a self portrait taken with a smartphone or tablet and bunged on the interweb for millions to drool over. Interestingly there’s some research that shows that if you are looking at some kind of text on a web page or social networking service and there’s no image associated with the text, people have less trust toward that information.The picture of the photographer/author/subject is in effect a key to authenticity or belief in the information itself. That’s why I tend to put pictures on the blog. I can rabbit on as much as I like, but a picture speaks a thousand words, and if I’ve done something I can show I’ve done it, Even if its crap.

I’ve not had an update on here for a month or so now, so apologies for that, the blog has now had over 108,000 hits which is incredibly humbling and thank you for taking the time to come and read, the stats tell me its worth the effort. The reason for the lack of postings is threefold, firstly a natural ebb and flow in the interest of modelling and writing/illustrating, secondly preparing layouts and scripts for filming later this month, and writing for a new resource, which has been challenging and enjoyable simultaneously, with the invitation to write more material, which I shall endeavour to do, (media tart that I am)

So, ‘Shelfies’?, whats one of them then? Well its a shelf layout, i.e. not very deep. It is also a ‘selfie’ too, as its a single person project and can be designed,planned and constructed by one person. The depth, or lack of, creates plenty of challenges, in achieveing a realistic feel to the layout. I’m working on a project at the moment for the DVD where the layout is just under 30cms in depth. Within this I’m aiming to use forced perspective, I’ve done this before using Albion Yard see here;

but this is the first time I’m doing it in a very very restricted area in 4mm scale. This image above is a mix of 4mm and 2mm scale items across a depth of 45cms or so. Retrospectively it was quite easy to do at the time, as even with 45cms you have a good area to use in terms of depth. I’d had some experience in this ‘Shelfie’ design and build concept with the ‘Collier Street’ Railway Modeller/Peco project layout I built in N gauge. This has been invaluable in preparing the current layout, you get a feel for when ‘the wheels are coming off’.

When you get to the narrower board I’m currently using theres a whole new ball game of getting everything to work together to make a sense of depth in less than 30cm, not to mention adding a working 4mm/ft scale trainset running through it too. To keep my interest the layout has to function and look plausible, this was one of the big stumbling blocks to start.

I’d got off to a flyer initially but then I got more disilusioned as I realised what I was making didn’t ‘work’. The above shot gives an idea of the ‘failed’ design, even playing with different lighting effects made no difference. The visual/plausible and practical factors were all conflicting, because what I was making was unrealistic. When you realise this its time to bite the bullet and get back to basics, and redesign/plan/build. Many dont do this and undoubtedly thats the reason for any number of stalled projects, uncompleted layouts, and poorly finished examples that are around, you’ve got to be in it to win it! For me this meant pretty much starting again, but with the same track plan and area. What I’ve made in its place has suddenly come together over the last week or so, which with filming at the end of the month is cutting it very fine. But at least my ‘Shelfie’ now works, in all senses! 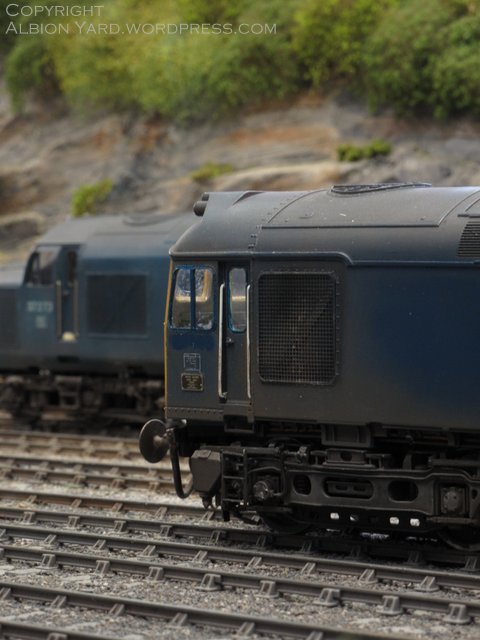 This weekend at Nottingham, I get to mess around with Simon Thompsons Aberbeeg, Welsh valleys in Scale7 it’s whats known as a large layout, and its great fun to operate with a great team too. I’ll also be handing over a new test print of a digital backscene, with what I think will be a unique presentation, it’s certainly out of our comfort zone and not of a style or design I can recall seeing, test projections of it worked well. Completion is a couple of years off yet, but it’ll be a talking point and may break new ground in a similar way that Albion Yards backscene has done.